Express Solicitors’ specialists in personal injury claims, acted for claimant Debra Wood, 58 from Dartford, Kent to pursue a claim against Sainsbury’s supermarket, after a slip in her local branch left her with lifetime limitations to her right wrist.

Following a routine visit to her local Sainsbury’s supermarket, Debra slipped on a discarded grape, severely injuring her right wrist and requiring her to undergo five operations to correct the damage.

Debra had previously been turned away from two other law firms and approached Express Solicitors after responding to an Injury Lawyers 4U TV advertisement.

The team at Express Solicitors not only took on her case, but secured liability from Sainsbury’s, which resulted in Debra agreeing to an out of court settlement of £180,000.

Commenting on her injuries, Debra said: “The accident literally turned my world upside down. For year’s my right wrist has been in plaster, I’ve been in and out of hospital, physiotherapy on and off for five years. The normal things that people take for granted I could no longer do and on top of this I suffered from chronic pain syndrome and depression.”

Commenting on the case, Katryn Mercer from Express Solicitors, concluded: “Establishing liability for an accident of this nature can take time and perseverance, thankfully with Debra’s case the whole accident, including the lead up and post the fall was captured on the store’s CCTV. We were able to have access to this with the footage helping to secure full liability from the retailer.

With liability secured this should have been a straightforward, quick case, however because Mrs Wood recovery was slow and each operation met with setbacks, we wanted to allow time for a full recovery. Knowing that she will now never fully recover and regain total movement back in her wrist, the barrister advised her to accept the out of court settlement.”

On the day of the accident, Saturday 15th October 2015, Debra Wood was routinely visiting her local Sainsbury’s supermarket to complete her weekly shop. Shopping alone with only a few items in her basket, Debra walked down the main aisle of the store to the back near the Deli counter when all of a sudden, her foot went from underneath her. She fell with force onto her right hand, which took her whole-body weight, and resulted in her severely damaging her wrist.

“I knew I stepped on something green and the Sainsbury’s worker went over and identified it as a green grape. We thought at the time it was from the Deli Counter but no grapes were there so a customer must have discarded it.”

“I was treated immediately by the store’s First Aider, who got me comfortable while waiting for the ambulance. I then went straight to the local hospital. It was badly swollen so although they X-Rayed it, I was discharged and asked to attend again on Monday after the swelling had gone down. It was after that appointment that they then said I required surgery to correct it. 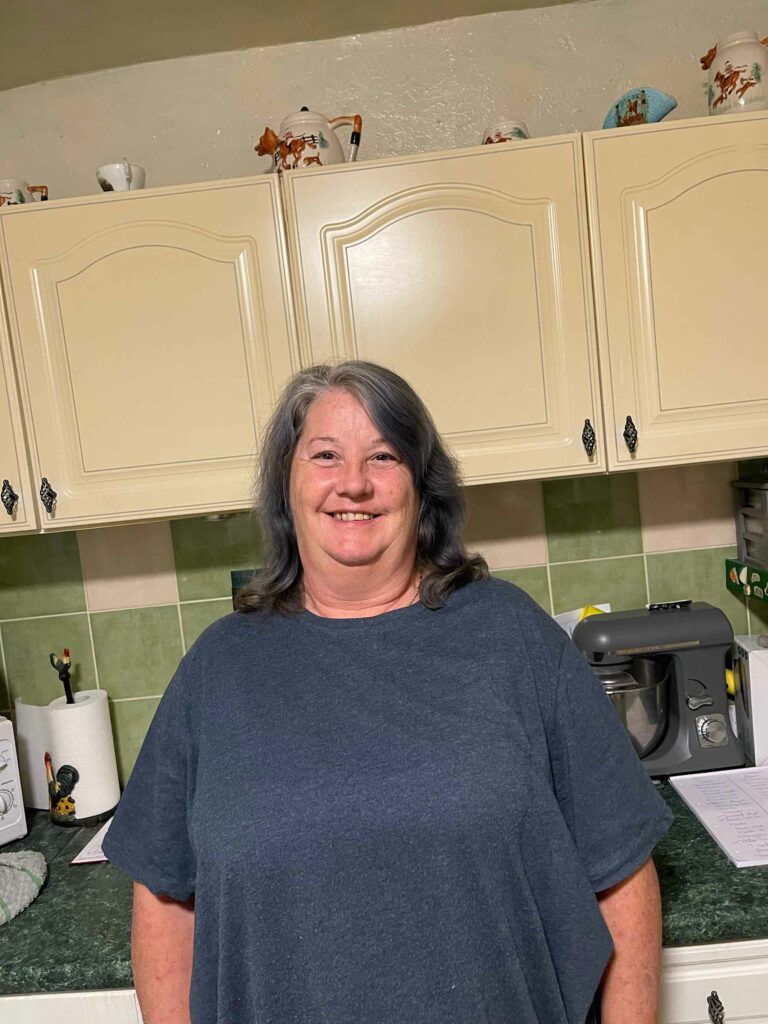 “Unfortunately, despite having undergone 5 wrist operations, with metal plates inserted and bone grafts to correct my movement, I still can’t move my right wrist fully.

“Over the last six years, I’ve lost count of the number of months I’ve been in plaster following an operation and then attended several physiotherapy sessions, only to find out something else is wrong. I’ve developed chronic pain syndrome and also had to have a carpal tunnel operation due to a trapped nerve.

“My life really has been put on hold and revolved around the hospital appointments.

“Luckily my husband, who was able at the time but unfortunately passed away from his illness not long ago, was able to care for me. I got so frustrated and depressed and no longer wanted to leave the house. You see, it’s the little things that we all take for granted that I needed help with on a daily basis and I got frustrated that I couldn’t manage myself. You don’t realise what they are until you can’t do them yourself. Washing and drying my hair, brushing my teeth, putting on a bra. Simple tasks that my husband had to help me with.

“I’ve now learnt to adapt to my limited movement and for instance brush my teeth now by moving my head instead of the brush.

“I’ve made a lot of progress and adaptations around the house to help me live a relatively normal life.

“It was a chance meeting with a friend of a friend who worked in insurance that suggested I might have a claim.

“Express wasn’t the first firm that I spoke with. I was actually discounted by two other lawyers who told me they both wouldn’t be taking on my case.

“I then spoke to the team at Express through responding to an Injury Lawyers 4U TV ad. The Express team there was incredible, so supportive and kept me well informed. What I really appreciated was the fact that they communicated in plain language, no waffle or legal terms so I felt in control at all times. I developed a great relationship with them and they too with my late husband also, and I’ve happily recommended them to others. They were simply brilliant.”

Debra’s case was settled out of court in May 2021. Securing £180,000 compensation, the money has provided her and her son with the security to continue living in her current home and have added two sausage dogs puppies for company. Debra has also found the confidence to return to work at her local social club on a part-time basis.

Commenting on the conclusion of the case, Katryn Mercer, from Express Solicitors, added: “The team are delighted that Debra could finally put this ordeal behind her as best she could and move on with her life. The amount secured was well above what we’d usually expect in a slip and trip case and an incredible achievement for the whole team.”