James went on to discuss personal injury law firms offering incentives to clients to make a claim as well as whiplash claims and the need for medical examinations. 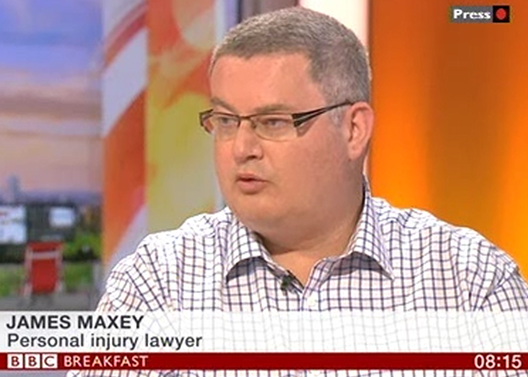 James first appeared on the BBC Breakfast show at 6.41am. After the presenters had discussed a fraudulent whiplash claim that was thrown out at court, they asked…

So James you’re a personal injury lawyer, would you have supported that case in that instance?

Well looking at it from the end – no. The difficulty personal injury lawyers have is that they may or may not meet the client but they will receive instructions from a client about an accident.

Why don’t you meet the client?

Due to the costs one can recover in dealing with a case which are constantly working down and the fact that of course we work across England and Wales. Nearly all personal injury lawyers and solicitors now have clients up and down the country.

But you investigate your clients before you bring their cases so surely part of the investigation is to meet them, isn’t that a sensible starting point?

Not necessarily, the way in which one gathers evidence for personal injury case is to talk to the clients and get their information. You can talk to them on a telephone as well as face-to-face.

Would they not need a doctor’s report?

Absolutely – every single case has a medical report. The only time that there isn’t a medical report is when the insurers make what we call ‘a pre-medical offer’ which is really a very unhelpful way of dealing with them because it doesn’t work to weed out fraud.

How do you feel about incentives being banned?

I’m okay about that…it’s a bit of a dichotomy at the moment as claims companies can’t offer incentives because of their regulators rules and solicitors can but only to the client directly not to introduce a friend. It’s a bit of a weird anomaly in the rules. I’m relaxed about it, the way my firm gathers work is that it advertises on the television and the internet and if people phone us and say ‘I’ve been injured’ we take instructions from them.

I presume people describe the work that you do as ambulance chasing, do you recognise that?

I recognise what the threat is; the insurers really have won the PR war and all hats off and credit to them. The insurers are the people that have fed into today’s Ministry of Justice press release. I can completely accept that they’ve won the PR war and that they’re very powerful the insurers. I don’t accept that claimant personal injury solicitors are somehow bad. We provide a very useful service not just to the people that need compensation but of course in minimising accidents because insurance premiums rise and insurers exert control therefore we serve a very valid purpose in society

In between his first appearance on TV and the second appearance, James was interviewed on BBC Radio 4, BBC Radio Five Live, and BBC radio Manchester. The BBC Breakfast TV and BBC Radio 4 clip can be found on the firm’s YouTube account.

At 8.14am James returned to the BBC Breakfast studio to answer further questions… 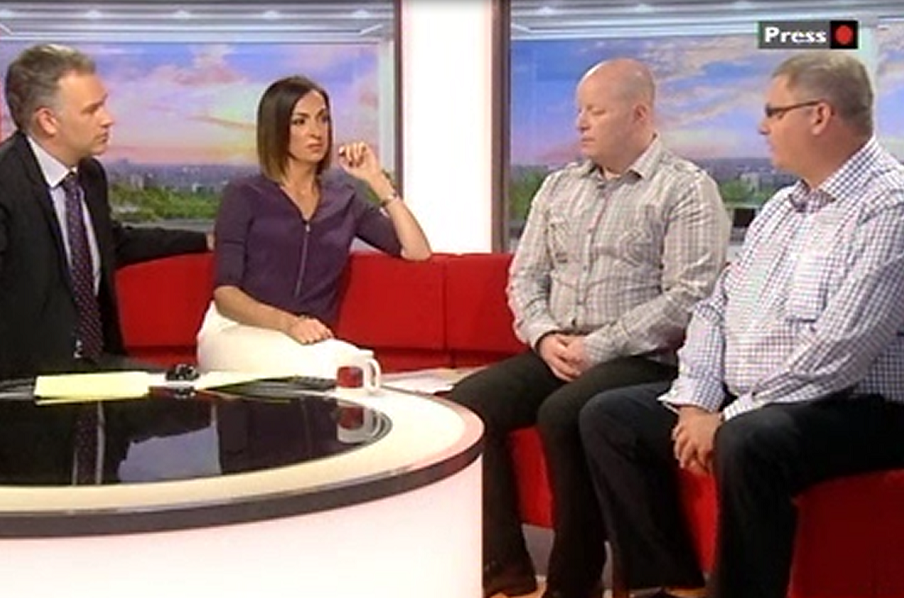 James, do you offer incentives for people to come to your business?

My firm’s method is to advertise and if people have been injured they contact us and then we screen through the cases to take forward the ones that we think have a chance of success as we don’t get paid for losing cases.

What do you think of your competitors that do offer incentives?

I’m reasonably relaxed about it, but I think that this is quite a small part of the debate although it’s the headline today and some of the other reforms are of more interest to me. I think it is odd that claims management companies who aren’t solicitors are bound by their regulators from offering incentives, solicitors can offer them to a client but not to someone who introduces the client – so I see it as a muddled yet of rules at the moment. I wouldn’t mind if incentives were banned but actually it isn’t what’s causing a lot of people to instruct solicitors to make a claim.

‘No Win, No fee’ is what your firm does along with many other solicitors. Is that not itself part of the problem in that people are coming to you and they don’t have an awful lot to lose so they’ll give it a go and maybe they shouldn’t?

Well they do have a lot to lose now. ‘No win no fee’ as it was from 2000 was ‘no win, no fee’ whether you win or lose though when you won, the losing insurer paid the extra fee to the lawyer. Now if you win you do pay a bit of your fees, you don’t pay if you lose but the lawyer loses so they won’t take on a weak case or if it becomes weak as they develop the case they’ll stop it, so I don’t think ‘no win, no fee’ is a problem. It was what the government bought in to replace legal aid when they wanted to save money in Tony Blair’s government and take legal aid away to adjust the system.

So James, if fraudulent claims are thrown out shouldn’t somebody who pursues a claim like that and indeed maybe the lawyer that’s helped them to do it, face some sort of sanction themselves?

Well for the person who pursues it I would hope there would be subsequent criminal convictions. Sometimes there are and there a relatively low number of convictions each year. The lawyer if they did it fraudulently by the client stating ‘I’m staging an accident or exaggerating’ of course they would be frankly struck off by the regulator as an absolute minimum. Of course if the client is making it up and duping the lawyer there’s not much one can do.

But there is a difference as you say, between fraudulent claims and a little bit of exaggeration?

There isn’t a difference in that I support exaggerated claims; nobody supports any degree of fraud, dishonesty or exaggeration. The problem is proving it.

The insurers say there are 118,000 bogus or exaggerated claims each year, they say there are 60,000 motor claims that fall into that category. But, in fact in terms of convictions it’s a tiny number or cases that go to trial and the judge in the civil trial find the case dishonest or even cases where the insurers say we won’t pay you and the person goes away. So the insurers have amassed the numbers based on ‘we think it might be fraudulent’ and the numbers are self- serving.